In prior posts, I have demonstrated how to download, calculate, and compare fantasy football projections from ESPN, CBS, and NFL.com and how to calculate players’ risk levels. In this post, I will demonstrate how to win your snake draft so that your team is projected to score the most points.

In a snake draft, unlike an auction draft, the team manager has an assigned pick slot, at which point some players will already have been drafted.  As a result, a manager has a limited selection of players to choose from, but can choose any player within the remaining pool of players.

How to Win Your Snake Draft

The goal is to pick the remaining players at each pick that maximize the team’s sum of projected points for the starting lineup, while minimizing the downside risk of the starters.  This is a key point because you will only receive points for who is in your starting lineup for a given week.  Having strong bench players does you no good if they stay on the bench.  In other words, picking a second quarterback before picking your first wide receiver is not a good idea.

A Harvard study found that the best drafting style was one that: 1) considered a player’s projected points relative to that of a typical replacement player (rather than a player’s number of projected points in absolute terms), and 2) maximized this value for each position in the starting lineup before drafting bench players.  I will refer to requirement 1 as value-based drafting, which relies on a metric known as value over replacement player (VORP).  I will refer to requirement 2 as starting lineup first.

When drafting players, it makes sense to draft your offensive starters first before you draft any bench players.  Moreover, depending on your league settings, it’s generally best to wait on Kickers and Defenses until later rounds because they have lower predictability and score fewer points, on average, than other positions (see here). 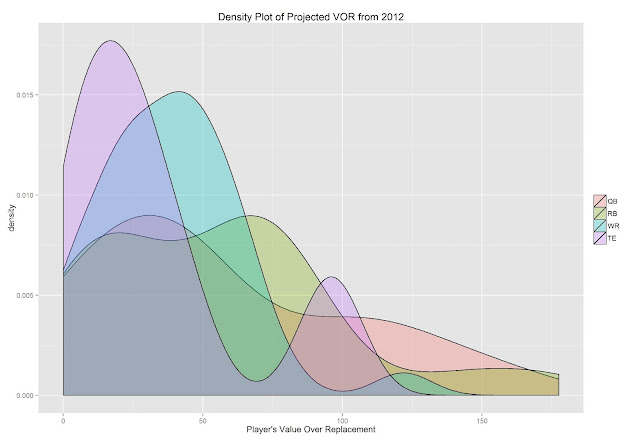 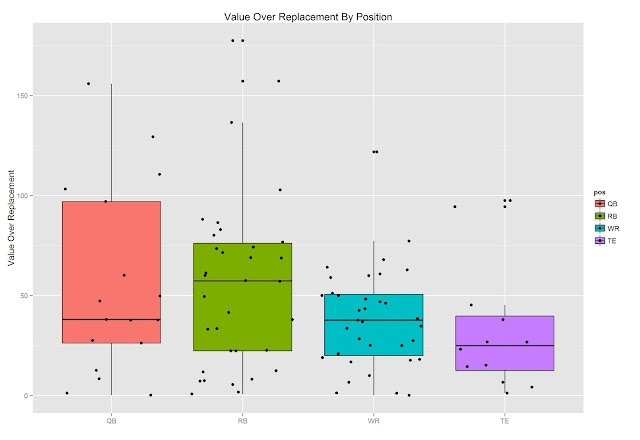 The R script also includes a section where, on draft day, you can specify the names of players that have been drafted, and it will show you the remaining available players ranked by value:

In conclusion, there are 4 guidelines to win your snake draft:

The R script accompanying this post calculates players’ values and allows you to sort low- and high-risk players by value and to remove drafted (unavailable) players.

In subsequent posts, I will demonstrate how to win your auction draft by maximizing your team’s projected points and minimizing its downside risk.