In prior posts, we demonstrated how to download projections from numerous sources, calculate custom projections for your league, and compare the accuracy of different sources of projections (2013, 2014, 2015, 2016).  In the latest version of our annual series, we hold the forecasters accountable and see who had the most and least accurate fantasy football projections over the last 5 years.

To compare the accuracy of the projections, we use the following metrics:

The results are in the table below.  We compared the accuracy for projections of the following positions: QB, RB, WR, and TE.  The rows represent the different sources of predictions (e.g., ESPN, CBS) and the columns represent the different measures of accuracy for the last five years and the average across years.  The source with the best measure for each metric is in blue.
Here is how the projections ranked over the last four years (based on MASE):

Notes: CBS estimates were averaged across Jamey Eisenberg and Dave Richard.  FantasyFootballNerd projections include only their free projections (not their full subscription projections).  We did not calculate the weighted average prior to 2015.  The accuracy estimates may differ slightly from those provided in prior years because a) we now use standard league scoring settings (you can see the league scoring settings we used here) and b) we are only examining the following positions: QB, RB, WR, and TE. The weights for the weighted average were based on historical accuracy (1-MASE).  For the analysts not included in the accuracy calculations, we calculated the average (1-MASE) value and subtracted 1/2 the standard deviation of (1-MASE).  The weights in the weighted average for 2016 were:

Here is a scatterplot of our average projections in relation to players’ actual fantasy points scored in 2016: 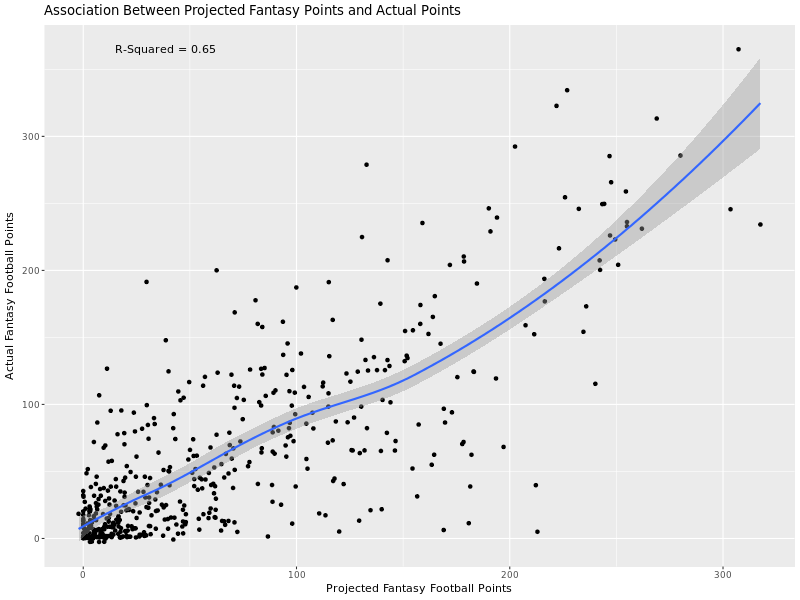 Fantasy Football Analytics had the most accurate projections over the last five years.  Why?  We average across sources.  Combining sources of projections removes some of their individual judgment biases (error) and gives us a more accurate fantasy projection.  No single source (CBS, NFL.com, ESPN) reliably outperformed the others or the crowd, suggesting that differences between them are likely due in large part to chance.  In sum, crowd projections are more accurate than individuals’ judgments for fantasy football projections.  People often like to “go with their gut” when picking players.  That’s fine—fantasy football is a game.  Do what is fun for you.  But, crowd projections are the most reliably accurate of any source.  Do with that what you will!  But don’t take my word for it.  Examine the accuracy yourself with our Projections tool and see what you find.  And let us know if you find something interesting!