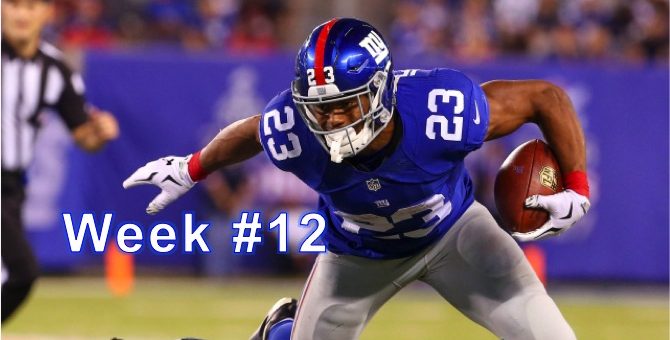 The favorite line of my high school soccer coach was “you can’t let bad teams hang around.” In the NFL we often see games that stay close even when they shouldn’t be. Among other teams, the Falcons (-.574) and Giants (-.492) have a habit of playing down or up to their opponents. As a result of these scenarios, a QB’s performance is generally negatively correlated with his own defense (-.54). Correlation is the linear relationship between two variables. The number it produces falls between -1 (indicating a negative relationship) and +1 (indicating a positive relationship). Correlation is useful because it can indicate a positive or negative causal relationship and its relativity (how close it is to 1 or -1). The league-wide correlation matrix for the 2016 season thus far is:

Note the 1’s along the diagonal and identical upper/lower triangles that repeat the correlations between all other two variables combinations. You read the matrix by matching a column to a row and reading the correlation value that compares the two. The full excel spreadsheet with team-by-team correlation matrices can be found here: position-correlations-2016.

The most notable correlation is between QB and opposing D/ST. The two are negatively correlated (-.54) and give us two important things to know. First, and this may be the obvious, but never to play both a QB and the opposing D/ST. Secondly, playing the opposing defense to your Head-to-Head opponent’s QB or vise versa can reap extra benefits if you have confidence that you are choosing the better play between the two. RB also has a moderately negative correlation with opposing D/ST (-.32). Last week, Jaret made an excellent comment on when to use this to your advantage: “If you are favored, you could view the negative correlation between your two high value assets as a hedge: it’s roughly 37% less likely both will stink or both will have a big game than if they were not playing each other. But if you are the underdog, you’ll want to avoid hedging, and likely play only one. You can’t have off setting assets capping your upside if you’re already the underdog.”

Not only can correlation help explain the phenomenon of playing an opposing defense to one of your players, but it can also explain stacking, which is the idea of having two players of the same team to reap the benefits of correlation amongst them. The second largest correlation is between QB and WR1 (+.43). There is a drop off from QB down to WR2 (+.35) but certainly a notable correlation. The correlation explains the idea that if a QB has a great game then in response the WR1 of that same team is likely to as well. The inverse of this also applies in that if a QB has a poor game then the WR1 is likely to perform poorly as well. WR1 with WR2 or TE performance is completely uncorrelated (+.02~+.01). This statistic says that it is generally neither beneficial nor harmful to have/play both the #1 and #2 WR receiver or TE of a team. What the correlation statistic does not account for is the ceiling that this places on those players combined number of total points. Another pairing that lacks correlation is QB with RB (+.02); however individual teams like the Colts (-.58 correlation) and the Buccaneers (+.67 correlation) show the variances amongst observations. Looking at the individual team correlations can provide valuable insight into a team’s correlation trends, but the numbers are expected to regress to the mean (league-average) in the future and situations within the teams often change their correlations. The fact that QB-RB is not negatively correlated means that they generally do not take away from each other except in terms of ceiling as mentioned before. In a 50/50 league or standard fantasy league where you wind up with both players, if the matchup is right, there is no problem playing both.

Some other notable absolute correlations for individual teams are:

*NOTE: WR1 is the receiver that was projected to get the most points at that position for each individual week. Therefore, if a starter was injured the “next man up” replaced him in the observations for all positions. If a player was injured during the game, his points count towards his slotted position for that week and he was not replaced.

Just like last season, Jennings is picking up steam in the second half of the season and has cemented a firm grip on the starting RB job for the Giants. Terrence West (BAL) is the only RB that the Browns defense has been able to somewhat limit this season. There are too many positive trends here to not play Jennings.

Since coming back from injury, Martin has faced the number 4 and number 11 fantasy points against rush defenses. As his carries increase and his opponents become easier, look for him to put up dominate RB1 performances.

The Packers have given up 9TD’s to WR’s the last 4 weeks alone. This number has propelled them into 32nd in the league against the fantasy WR. Mathews the WR1 for Philadelphia has been targeted 10+ times each of his last 4 games and has consistently put up a floor of about 60yds (See Weekly Gold Mining for more great insights). He comes in as an undervalued option in Daily Fantasy and someone who should be inserted into any standard league lineup.