This post describes a Shiny app that identifies fantasy football sleepers (players who are likely to exceed their statistical expectations and have a breakout season).  The app includes the most accurate fantasy football projections available, and calculates a robust average of more sources of projections than any other website using a robust average (see here for a list of the sources of projections).  You can even choose how much weight to give each source.  Based on your league settings, it determines which players are most likely to be sleepers.  Best of all, the app updates the selections automatically with your inputs, and you can download the data for yourself.  So let’s get to it.  Here’s a more thorough description:

How We Identify Sleepers

Sleepers are players that have the potential to greatly outperform their expected level of production.  To identify sleepers, we calculate players’ risk levels, as defined by the standard deviation (uncertainty) around the players’ ranks and projections across sources from experts and the wisdom of the crowd.  Note that risk is standardized to have a mean of 5 and a standard deviation of 2.  When the user checks the button to display sleepers, we display the number of sleepers at each position specified by the user.  We define sleepers as those players with the highest uncertainty risk (not injury risk) whose ceiling is at least 80 points and who have a low position rank (ranked lower than 80% of the VOR baseline for each position, except for Kickers and DST, for whom the player’s position rank is lower than 8).  Finally, the players are ranked by their ceiling (upside).  In other words, sleepers are players with a high degree of uncertainty, high ceiling, and low position rank.

When to Draft Sleepers

Sleepers should be drafted later in the draft as bench players because such a move has a low risk, high reward potential.  For bench players, value over replacement may be less important than a player’s ceiling because they only contribute to the team’s points if they score enough points to be on the starting lineup.  We include players’ ceiling (upside potential) in the output, as defined by the upper bound of the 95% confidence interval around analysts’ projections for a given player.

The app is located here.  For a more thorough description of how to use the app, see here. 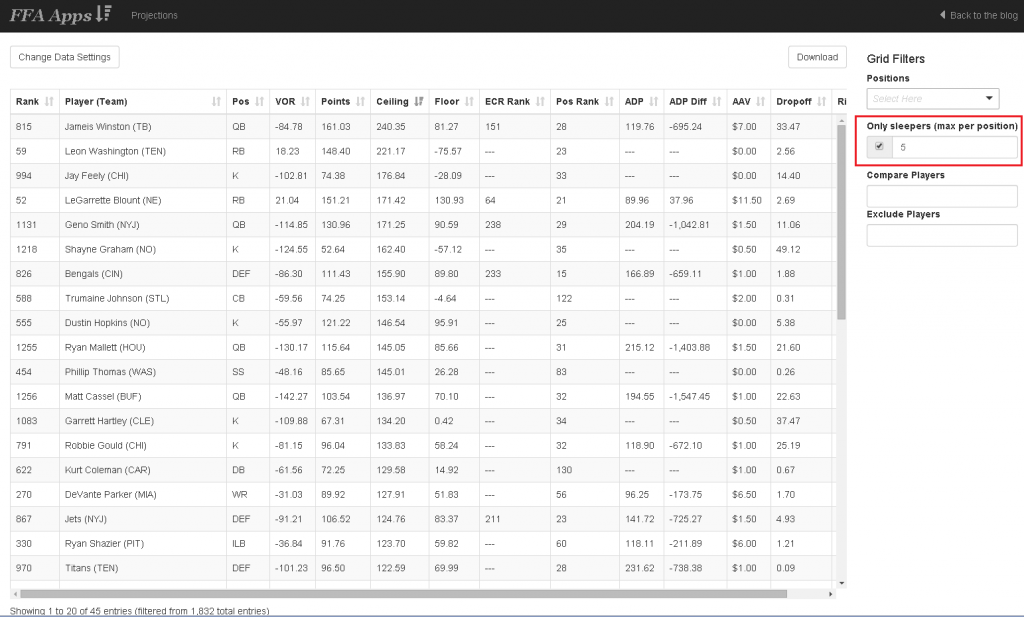